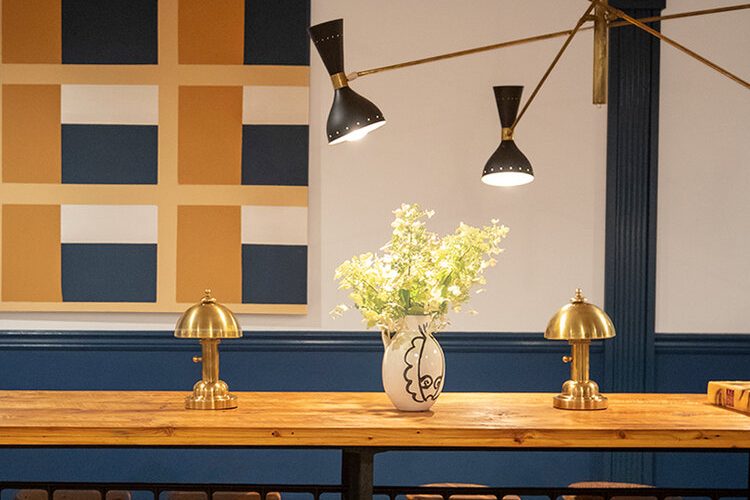 Welcome! Today in The Lounge, Nick meets the founder of Cochineal Design, Sarah Mendel, who, in just 5 short years since graduating from Parsons School of Design, has made a name for herself in the New York interior design community as a fresh and exciting designer to watch. 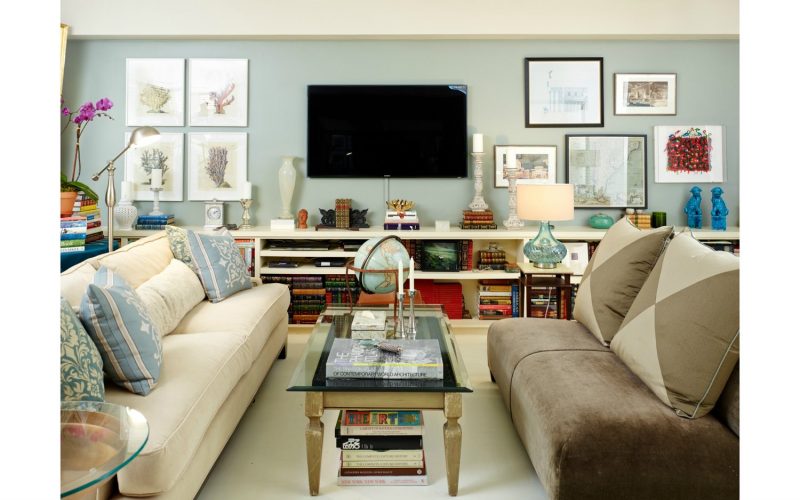 Thanks for coming back to the Chaise Lounge where, today, Nick talks to Courtney McLeod, the New York-based principal of Right Meets Left Design, who chose design as a second career after moving on from corporate finance. She graduated from the Wharton School of the University of Pennsylvania with a business degree and was successful in that field, but she wasn’t in love with her work. Courtney drifted more and more toward the art and design side of life until she couldn’t help but make her move. She quit her job without setting anything up or planning and pursued her new craft. 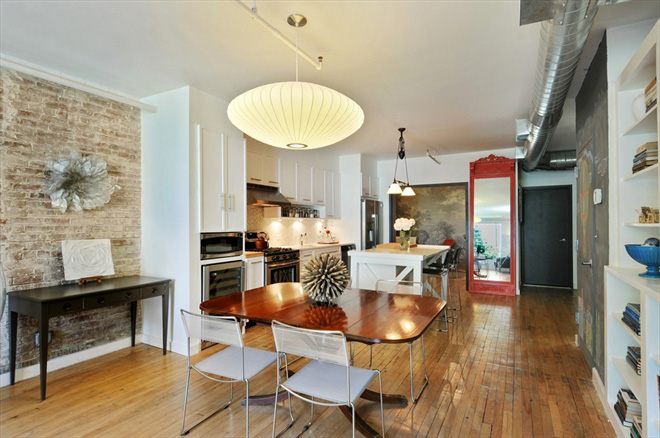 Maryline Damour is a designer based in Kingston, New York. Damour worked in marketing for most of her adult life until she bought a house in Kingston and began to wonder about the viability of working on interiors. But she dismissed the idea until an earthquake in her native Haiti helped her understand the importance of interior design and pushed her into her new career, which has included the restoration of a damaged but structurally-sound Haitian church. 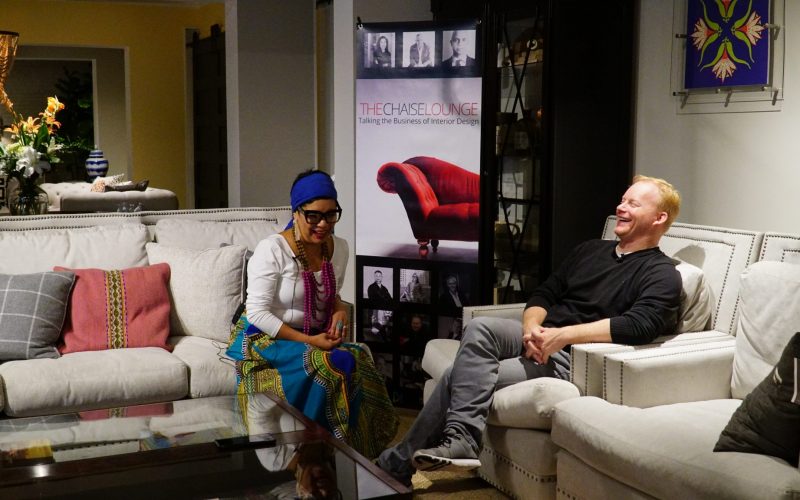 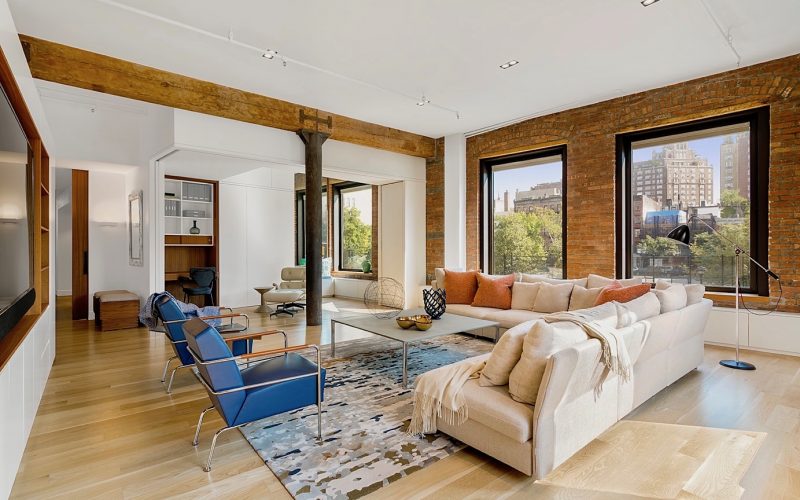 Welcome! Today in the Lounge, Nick is joined with Michael Wood, from the heart of New York, and Peter Lang, the designer CPA. Peter chats with Nick about his latest book and the importance of having an accountant to manage all your numbers as a designer. Nick and Michael chat about designing in New York and being an entrepreneur. 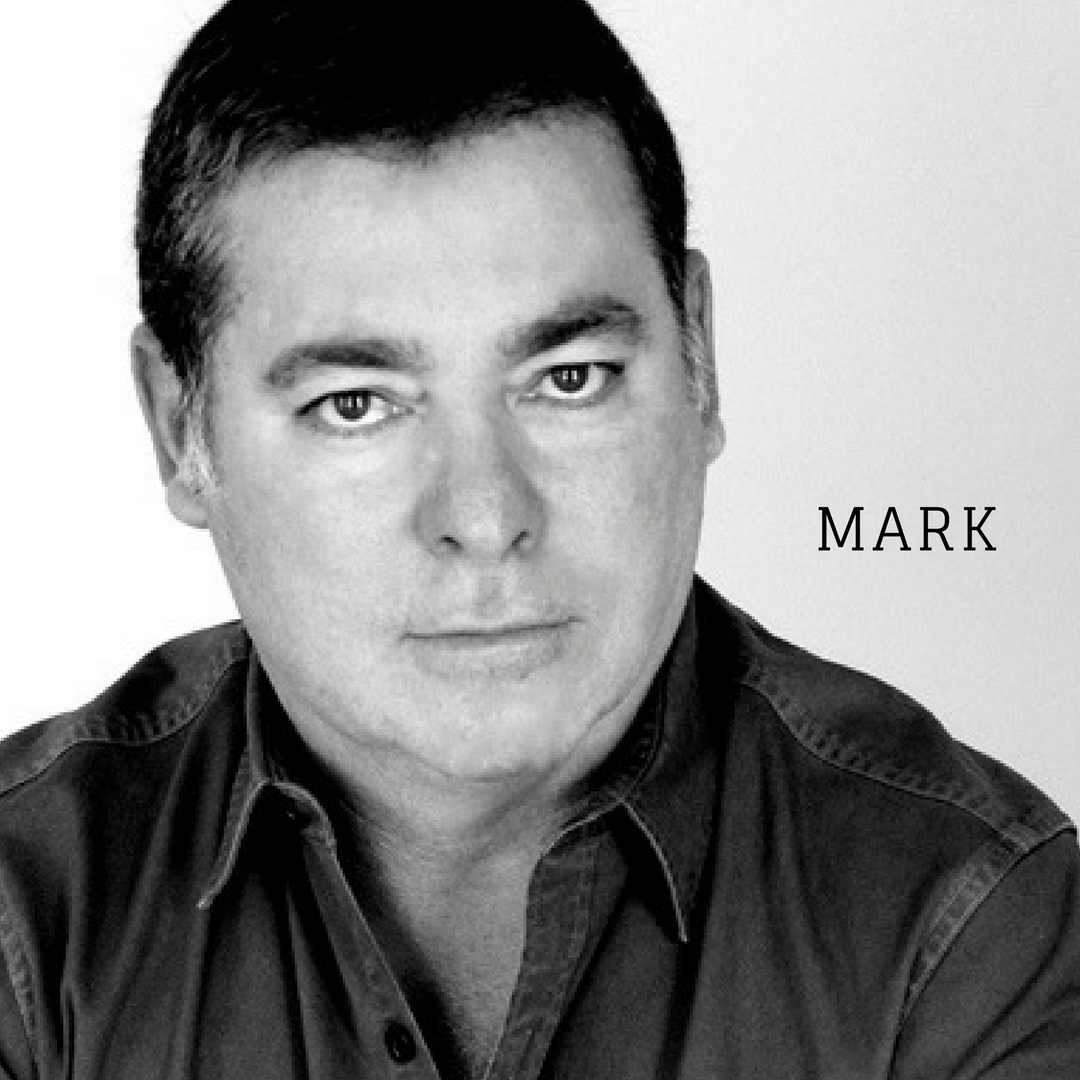 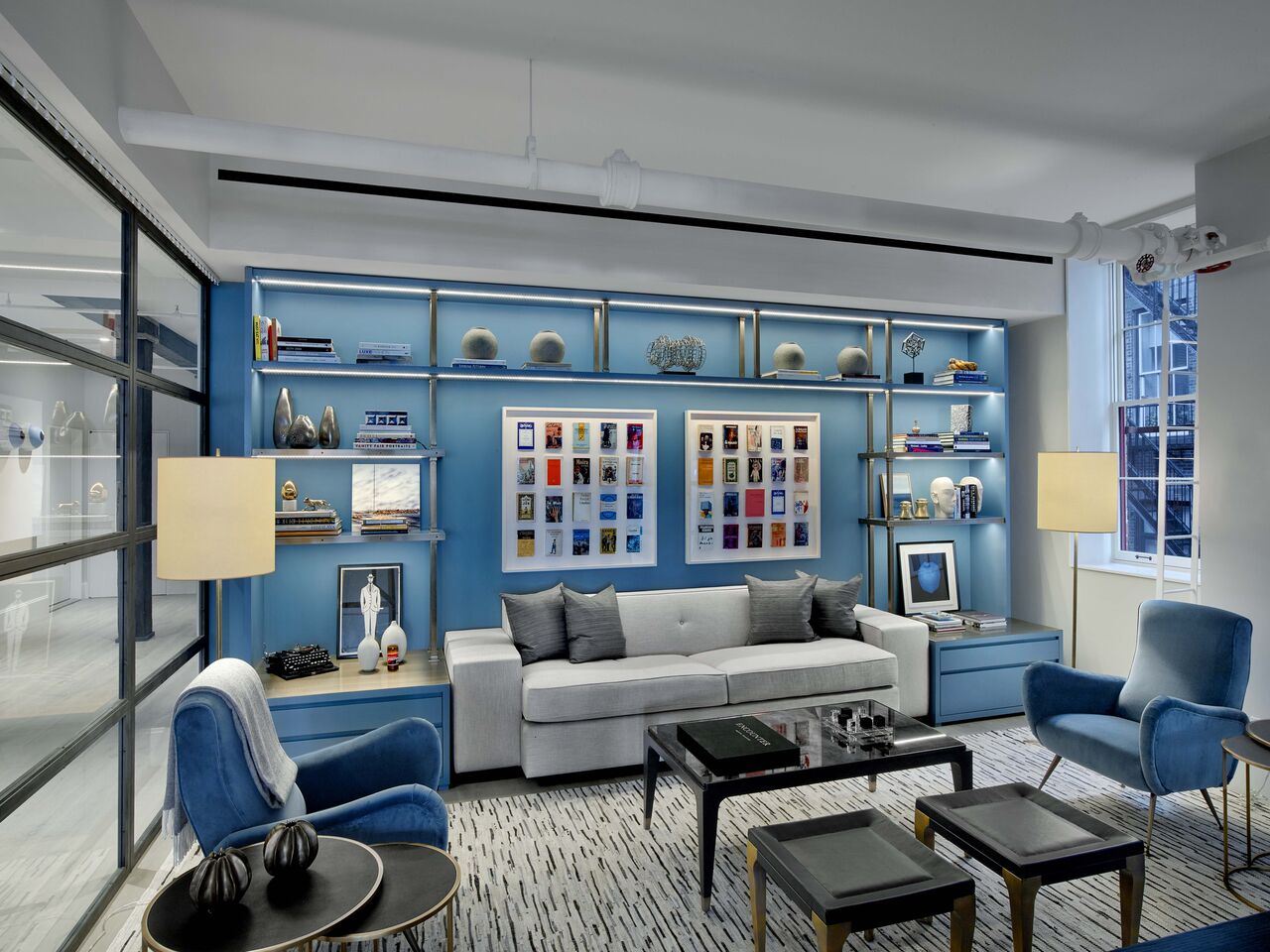 Today in The Lounge, Nick interviews Mark Zeff, a recently inducted member of the Interior Designers Hall of Fame. Mark tells us how he got started in interior design and how moving to New York was the best business decision he’s ever made. Find out on the episode how he has created a full-service firm, from branding all the way to designing fabrics.

Getting to Know Mark

Mark was born in Johannesburg, South Africa and moved to Cape Town at the age of five. He attended University in London and moved to Australia after finishing school. Soon after, Mark decided that New York is where he really wanted to be. His favorite vacation spot is Bay Beach in the Hamptons and this is where the inspiration for his New York shop came from. When Mark is asked beer, wine or cocktail, he responds “definitely a cocktail.”

How Mark Got His Start

Mark first became interested in interior design when he attended an industrial design school in Johannesburg. He soon found that interior design wasn’t enough, he wanted to be an architect. Mark loved art and machinery so architecture was the perfect career to marry the two together. He landed a job at a firm in Sydney but New York seemed like the place to be in the 80s. So, Mark took off to NY in 1982 to have a little fun. Three weeks later he was out of money, called Ken Walker up on a whim and got a job with him the following week. Ken Walker worked with some of the largest retailers in the industry such as Bloomingdales and Macy’s and the firm had 300 people working for it. Mark’s first big project was with designing a toy store. Later he was invited to work with Ken’s product development team. After 2 and a half years with Ken, Mark went to work for Robert Gerson, whose firm specialized in industrial design. With Robert, Mark worked on the control center at NASA as well as on the machines. While working there he met some people who asked him to design their fashion showrooms. That’s when Mark left to start his own firm in the late 1980s. 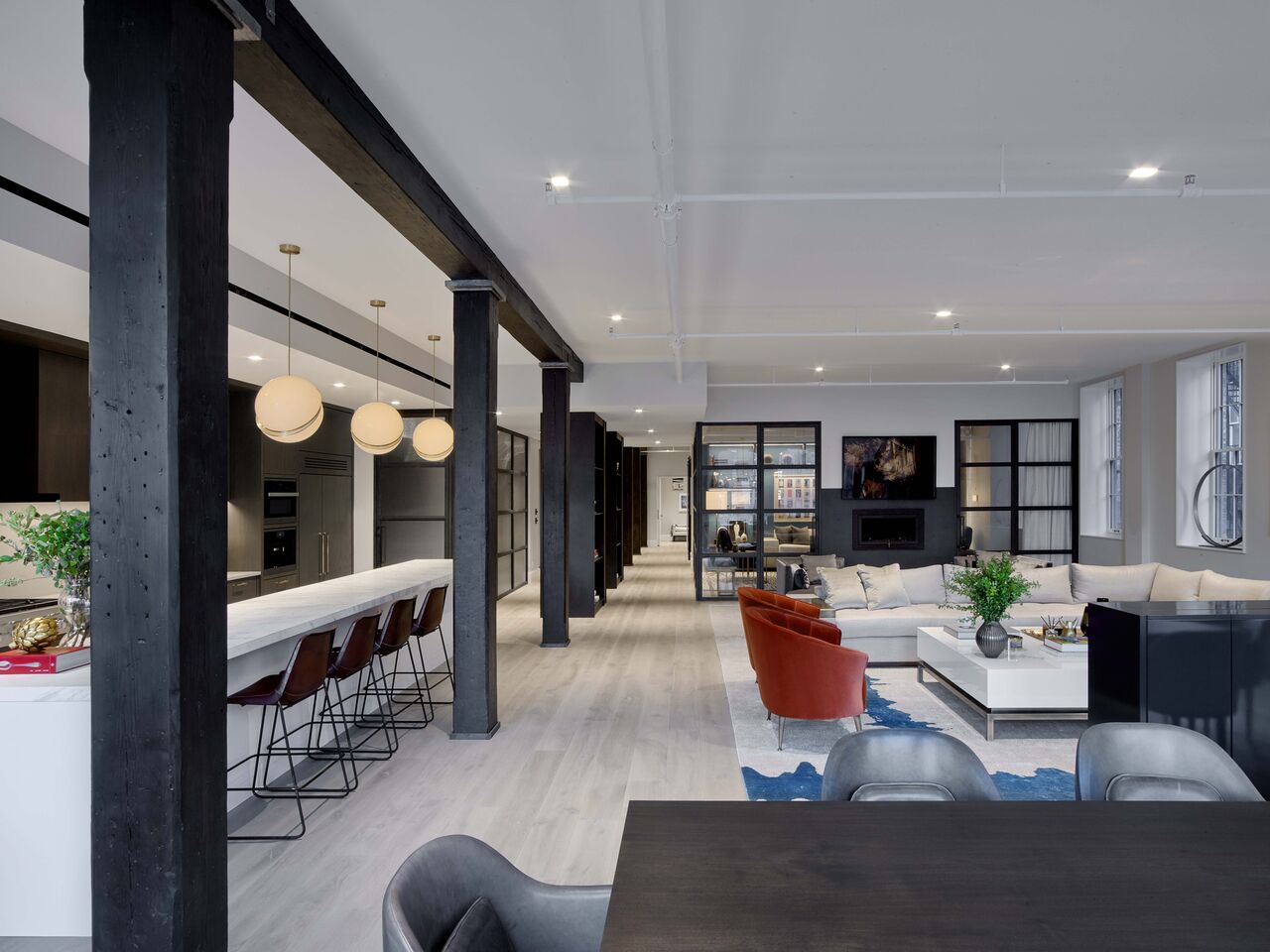 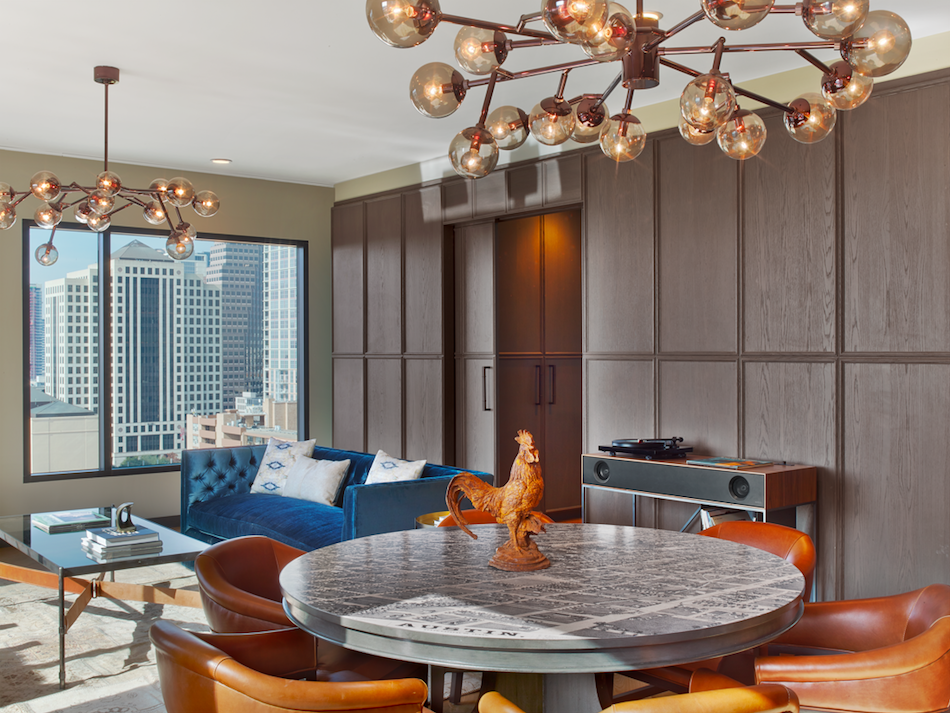 Mark runs his business from Dumbo, ‘Down Under theManhattan Bridge Overpass,” in New York. He fell in love with the interior of this 1920s building and converted it into his studio and store. Over the years Mark’s firm has had various employees, but now he staffs only about 25-30 people with backgrounds in branding, interior design, and architecture. They work all over in the industry including on homes, restaurants, condos, spas, rental units, townhomes, and apartments. Mark loves working all over and having a small firm. They do about 20 projects a year and some projects can last between eight months to three years. Branding is one of Mark’s passions. At fourteen he wanted to be a graphic designer so he looks at the world through a graphic eye. Mark runs a business that services everything you need designing furniture to fabrics and wallpaper. He uses branding as a huge tool in his business.

When Mark first started his firm he began by doing residential projects. The jobs he got were from people he met in nightclubs. His first big job was with Ann Baton, who came from a wealthy family and hung out with Andy Warhol. His transition to commercial design was by opening up a furniture store, that was similar to Design Within Reach. He imported furniture from Germany and Italy and also started designing his own furniture collection. A hotel business took notice and wanted to partner up with him. Mark’s first restaurant was the Red Cat on 23rd street. Later he worked on the Night Hotel, which really put him the map as a commercial designer. No else had done this kind of project before and to this day it is still called the sexiest hotel in New York City.

Mark opened a store in the 90s called Zeff Style but closed it after 9/11. He knew he wanted to open up another store again, so he gave a try in Brooklyn. BLACKBARN’s brand is to develop a home brand that has soul. People really love his store in Dumbo. It’s unique with its merchandising and collections. Mark received an offer from the Chelsea Market to bring his store into their business and make it the most exciting store in New York. It’s an experience where you can buy furniture and taste food to go with it. It will be a brand new concept for shopping and is scheduled to open late October of 2017. 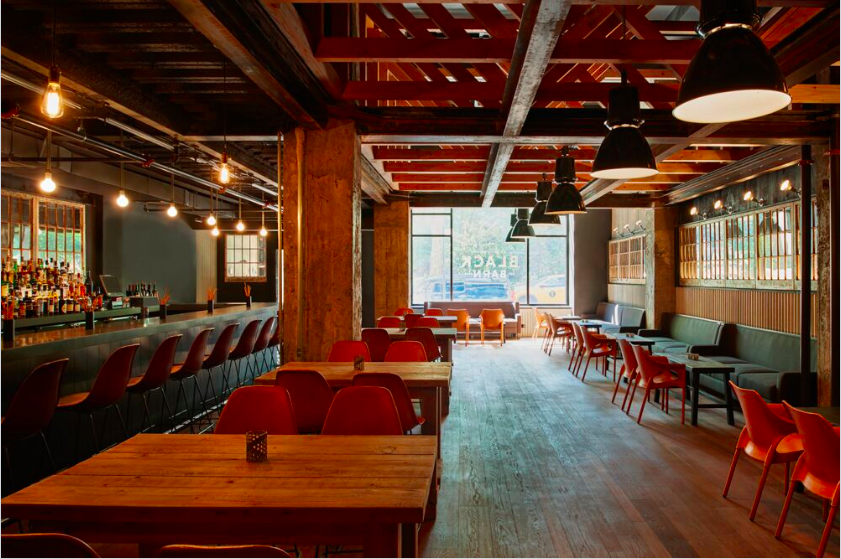 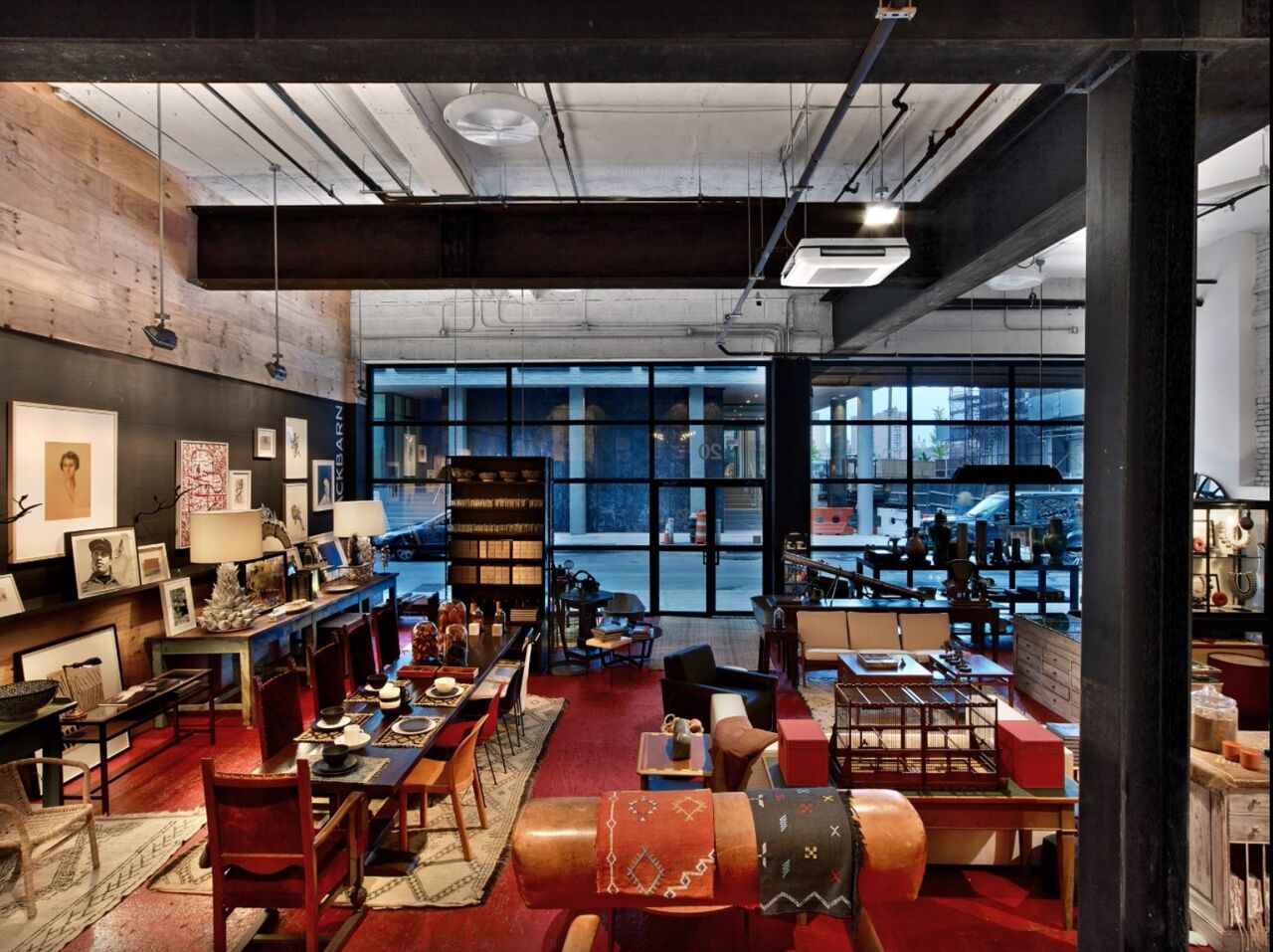 Design Manager‘s software has great functionality and makes it easy for designers to control their business, while also looking very professional. If you haven’t tried them, there is nothing to lose with a FREE!!! 30-day trial and a 90-day money back guarantee.

Porcelanosa Porcelanosa not only offers tiles for your home but everything you might need to decorate, from plumbing fixtures to furniture, so be sure to check them out.