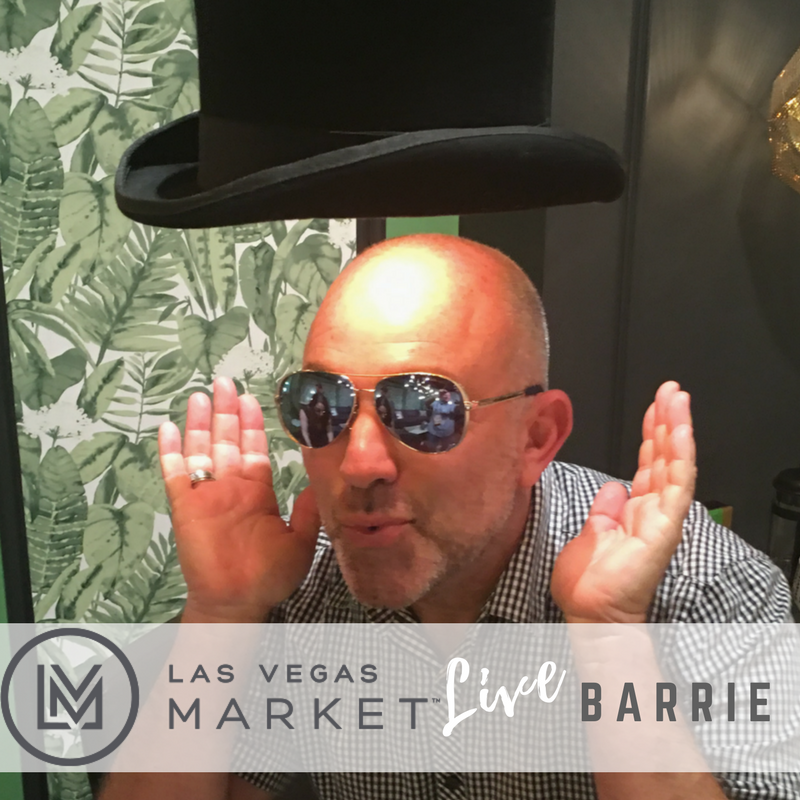 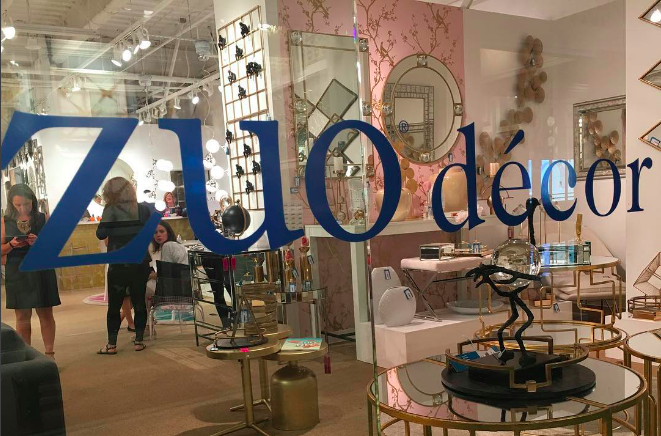 On this episode of The Lounge, Nick joins us LIVE from Las Vegas Market at Zuo Modern’s Tiki Bar with designer Barrie Livingstone. Barrie designs high-end million dollar homes and he LOVES his job: he was born to do it. On the episode, Barrie tells us stories about some of his celebrity clients, as well as about past projects he worked on around the world.

Getting to Know Barrie

When Barrie is asked beer, wine or, cocktail it’s always a cocktail; usually a clear drink like vodka or tequila. Originally from Manchester, England Barrie moved to Miami as a teenager at 14 years old. His career started in Miami Beach however he now lives in Malibu, California. Barrie also previously lived in Malaysia and Dubai for two years. He has been to 51 countries and 37 states and he always counts where he goes. Barrie loves to go back to the same places and finds himself a lot in the Caribbean, South America, and Italy. Capri & Amalfi are his favorite cities in Italy. Barrie’s favorite fashion accessories are shoes and socks. The most recent movie he’s seen is Best Friends with Burt Reynolds and Goldie Hawn.

How Barrie got into Interior Design

If you go to Barrie’s website it says “Barrie Livingstone since 1968” because he really feels like design is something he was born to do. As a child, he was obsessed with how people lived in Old English Manor houses with smaller furniture, smaller door heights, and smaller everything. Barrie thought he wanted to be an actor but instead, he acts out his fantasies with his clients doing interior design. He attended the Art Institute of Fort Lauderdale and got a four-year degree while he was working full-time. Barrie started working in January 1987 and his first day of school was in April 1987. This year he’s celebrating his 30th anniversary of doing Interior Design. Barrie’s first job outside of school was for a gentlemen in Parkland, Florida who owned those 1-900 and 976 “naughty” numbers back in the 80s.

After 7 years in Fort Lauderdale with the South Beach Design Group, Barrie realized he wanted to do bigger things out west and left for California. His dream was always to do television and movie star homes. One of his friends from design school worked on Versace’s house and then started working on Cher’s house, a 16,000 square foot home. Barrie went to visit the home and little did he know 6 months later he would be working on Cher’s house too, his first client in LA. He spent 8 months working on the home with 85 other people but working with Cher was easy, as she was very particular and knew exactly what she wanted. Barrie tells us that when working with a celebrity you feel very empowered because you’re at the beck and call of this powerful person. 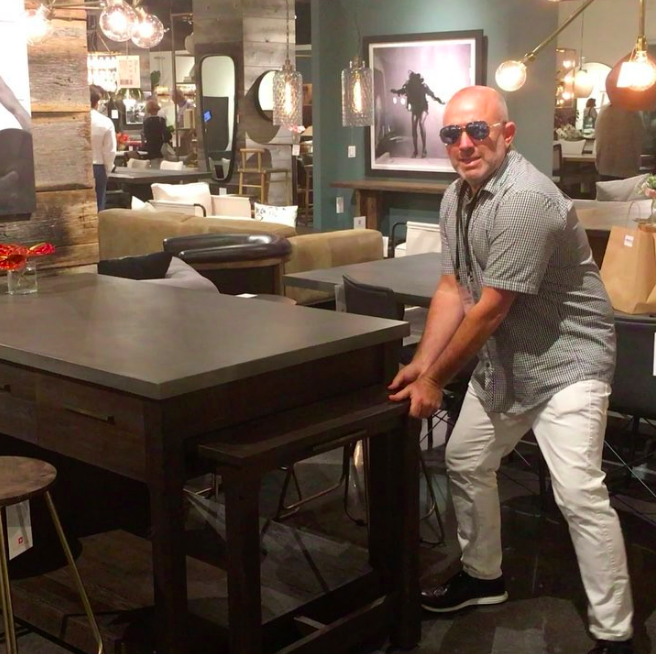 One of Barrie’s current projects is for a friend who just bought a 9 million dollar home. Barrie also just got back from Panama working on a big project. He can’t say much about because he signed a non-disclosure agreement, but his work will be a global television project coming soon.

When Barrie was in High Point being interviewed for the “Ask a Designer” show with The Design Network, one of the questions he was asked was, ‘What is the craziest thing a client has asked for?’ This didn’t happen to him but to his assistant. Barrie was designing a penthouse for a client who happened to be gay and wanted a giant four post bed. There was some kind of material that needed to be dropped off at the house and Barrie told his assistant, fresh out of school, 22 years old, to do it. As she was walking in the client asked her to come up the bedroom and told her to tell Barrie that the bed needed to be screwed into the ceiling and the floor. Why? Well, because he needed to be able to tie people to it and restrain them so the posts needed to be bolted down. The assistant came running back to Barrie crying,” he’s a monster, he’s monster, he ties people to his bed!” All that can be said is his assistant was indoctrinated quite quickly.

What’s made Barrie so successful is complete devotion to what he does. He loves having design in his life and having nice things around him, whether it’s fabric, friends or people. When he first came back from Dubai, after a two-year hiatus from the U.S, he had no clients and didn’t know what to with himself. One day he went down to the Pacific Design Center to look at fabrics and had moments with all of this gorgeous fabric. He spent 3 hours there and it was his therapy. Barrie loves meeting people and calls himself a person addict.

Barries does real estate as well, flipping and staging homes. He only started doing this five years ago but it was the next natural process for him after being a designer and salesperson. Starting out in design, Barrie loves that he can tell his clients how much a flip its going to cost. One of his most recent listings is a 7 million dollar home that he did with his partner Andrew McDonald in Malibu. They went to the mine.com and spent hundreds of thousands of dollars buying furnishings and lighting and used Zuo Modern as well. He says it’s wonderful to create interior spaces and then sell them.

Barrie also has a book called, Interior Design Tips Every Realtor Should Know But Doesn’t. The book includes 68 tips on what to do with your home, based on Barrie’s expertise. One tip includes: cleanliness is next to godliness. If you take care of your property, treat it with dignity and respect, then it will treat you with dignity and respect all the way back. An example is with doorknobs, which are easy to change all the way throughout owning a home. Also, Lighting is expensive and you see cobwebs on it which is not a good look. Clean it. Simple as that. One of Barrie’s mottos, since he began designing, is a room should be beautiful without furniture. When you walk into space and fall in love, it should be with the floors, molding, and light fixtures. Furniture should be the accessory.

One hat Barrie doesn’t like to wear is the bookkeeping hat so he hires somebody to keep track of his figures. He knows what his weaknesses are and he knows he needs someone to watch them for him. His favorite hat to wear is the television and entertainment hat because he really does love entertaining people. Barrie’s dad would say that you always put yourself in the nicest home in the smallest area and that way you’re always surrounded by amazing people.

On top of doing residential, Barrie does Hospitality design as well. At the InterContinental hotel in Dubai, he got to design seven restaurants and four different room types. He worked 90 hours a week for three months to complete it. A future design project Barrie would like to do is a holistic spa that is a very [green]-friendly design.

Learn more at www.barrielivingstone.com and don’t forget to say hi to Barry while you are there.

Benjamin Moore We apply hundreds of gallons of Benjamin Moore Paint to walls and cabinets every month. It’s our trustest product, why shouldn’t it be yours too?

Universal Furniture is our newest sponsor! Check them out!

IDS – Oct 13 – 16 *Put the code: CHAISELOUNGE to get a $100 discount through the end of September. For a chance to get a free ticket post an Instagram selfie in front of a showroom and have fun with it, tag it with #freedesignsummit.